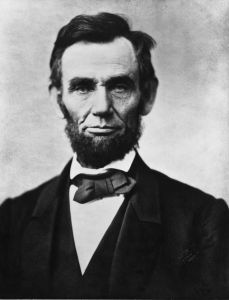 At 7:22 am, Lincoln stood before the throne of God, and the nation, who was in shock the very night before, was now thrown into mourning. News, of course, would take some time to travel across the land and many people actually heard the news days later. Andrew Johnson will be sworn in as President at 10 am this very morning. Our friend, Daniel Chisholm, tells the moment well. Here is his account:

“At dress parade this evening ‘The Assassination of President Abraham Lincoln’ was read to us. A silent gloom fell upon us like a pall. No one spoke or moved, our sorrow was so great that we could scarcely realize what had happened. I always thought that he was most loved by all the Army and people of America, but I am now sure of that. The ‘Stars and Stripes’ was quietly lowered, and old torn shreds of Flags almost quietly dismissed and we moved away slowly to our quarters, as if we each had lost a near and dear friend at home. Quietly, quietly we went to our rest. Was anybody glad, if he was he made no sign, and well for them they did not, for they never would have reached home alive. No drill, No Dress Parade. No Nothing, all quiet, Flags at half mast, lonesome was no word for us. It was like going from busy City to a fastness in the mountains, what a hold Old Honest Abe Lincoln had on the hearts of the soldiers of the army could only be told by the way they showed their mourning for him.” 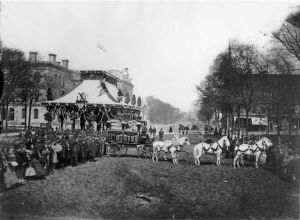 *LAST DAY OF THE SERIES AND GIVEAWAY! IT’S NOT TOO LATE TO CATCH UP ON THE PAST POSTS. Don’t forget to enter the giveaway for a mystery souvenir from Appomattox! Earn entries by sharing this blog link (comment below with your link), follow my weekly blog, and/or talk to me in the comments below. Don’t forget to leave your email address at least once during the giveaway. Click on the #ExperHist tag to catch up. THE WINNER WILL BE ANNOUNCED TOMORROW MORNING HERE ON THE BLOG!

Source: The Civil War Notebook of Daniel Chilsholm: A Chronicle of Daily Life in the Union Army 1864-1865

9 thoughts on “Experiencing History: Reliving the End of the Civil War, Moment by Moment: 4/15”